The trike is a homemade vehicle I built in the early '70's due to difficulty convincing my father that I should have a minibike.  It uses a bicycle frame, lumber, a Briggs & Stratton engine and four speed car transmission. 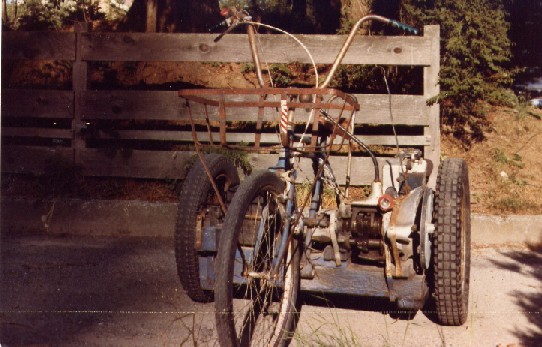 You can see above that a left to right drive arrangement is used.  There is a belt drive from the engine to the transmission.  A chain drives the axle from the transmission output.  The axle drives only the left wheel.  The right wheel floats on the axle to enable the trike to turn corners.  Accelerating to turn right and decelerating when turning left helps steer.   Two flashlights powered by a tire driven generator provide forward illumination.  The front mounted heavy duty paper route style carrier can carry any passenger brave enough or young enough not to know better.  Both my kids have ridden in it!  Top speed in 1974 was 28 MPH.  I weigh a bit more so performance has dropped.  Braking relies on the bicycle hand brake seen on the front wheel.  It is of minimal use so the ability to down shift with a crossways mounted 4 speed car transmission is essential.

Bicycle "banana seats" were still in style when this was built.  The bike frame is from a 1939 CCM that was originally purchased new at Moose Jaw Hardware in Saskatchewan.  Unlike regular bicycles and motorcycles, dogs dislike chasing this vehicle as the rear tires have a tendency to run over them.

This is yours truly preparing for the 1975 Maple Ridge B.C. Fall Fair Parade.  The trailer is made from two by four with spikes for the bike wheel axles.  The seat is courtesy of a VW Beetle.  The white rectangular signs are my entry number.  I completed the parade route without difficulty but the judges said there was no category for this type of entry, otherwise I would have won something.

This trailer is long gone but 30 years after the original construction, I found myself hooking up several wagons and giving rides to as many as 5 nieces, nephews and sons in my backyard. 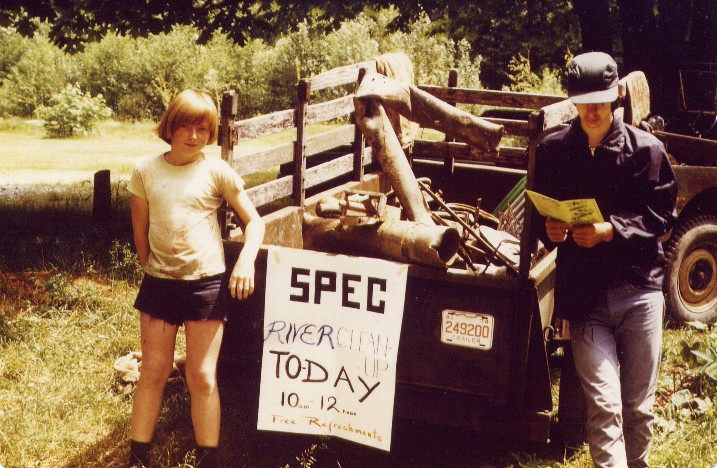 As you may have noticed, the components used are of a low budget nature, accessible to a 15 year old with minimal funds.  The motor had a cracked block that was fixed with epoxy cement and the heavy duty left side drive wheel and tire came from garbage retrieved out of the Allouette River in 1974.  The pictures above are Grant Merkley and my brother Fraser, age 12, during the annual SPEC Allouette River clean up in 1974.  The vehicle is Don Merkley's 1946 Willys CJ2 Jeep.

Don't ever forget that "One Mans Junk Is Another Mans Treasure"